Crustacean: A class of arthropods 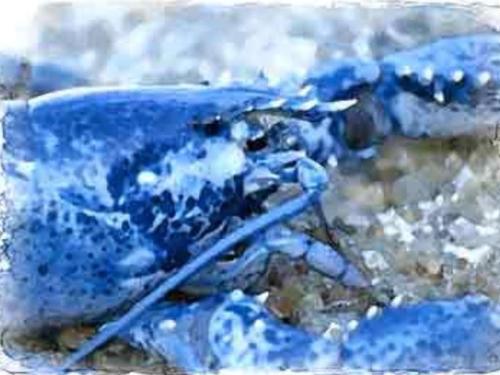 Seventy-five percent of all animals belong to phylum Arthropoda. Arthropods include the chelicerates (horseshoe crabs, spiders, mites, etc.), the insects, and the crustaceans. The largest group of marine arthropods is the class Crustacea, made up of approximately 30,000 species. Members of the Class include lobsters, crabs, shrimps, krill, hermit crabs, copepods and many other groups of organisms. It is convenient to divide crustaceans into two groups, the entomostracans and the malacostraceans. The entomostracans include the smaller species, such as fairy shrimp, water fleas, copepods, and barnacles. The malacostaceans include the larger, more familiar crustaceans, such as crabs, shrimp, and lobsters.

What do all crustaceans have in common?

All crustaceans have an exoskeleton made of the protein chitin and calcium. This external shell, in addition to being protective, gives rigid support for the attachment of the muscles. The exoskeleton is made of separate plates connected by thin membranes. This segmented exoskeleton creates joints, allowing the crustacean to move its body and appendages.

Typically, the body of crustaceans is divided into two sections: the head and the trunk. The head has five pairs of appendages: two pairs of antennae and three feeding appendages, composed of one pair of mandibles and two pairs of maxillae. The trunk is usually divided into the thorax and the abdomen. In many crustaceans a shell called the carapace covers the head and thorax. Crustaceans respirate via gills, located where the legs attach to the thorax.

How do they differ?

Most crustaceans are free-living, but some are sessile (attached) and a few are even parasitic. Some filter tiny plankton or even bacteria from the water, others are active predators, while still others scavenge nutrients from detritus. Although most crustaceans are dioecious (separate male and female individuals), the actual mechanisms by which they fertilize vary greatly. Some crustaceans hatch young that resemble miniature adults, others go through larval stages. 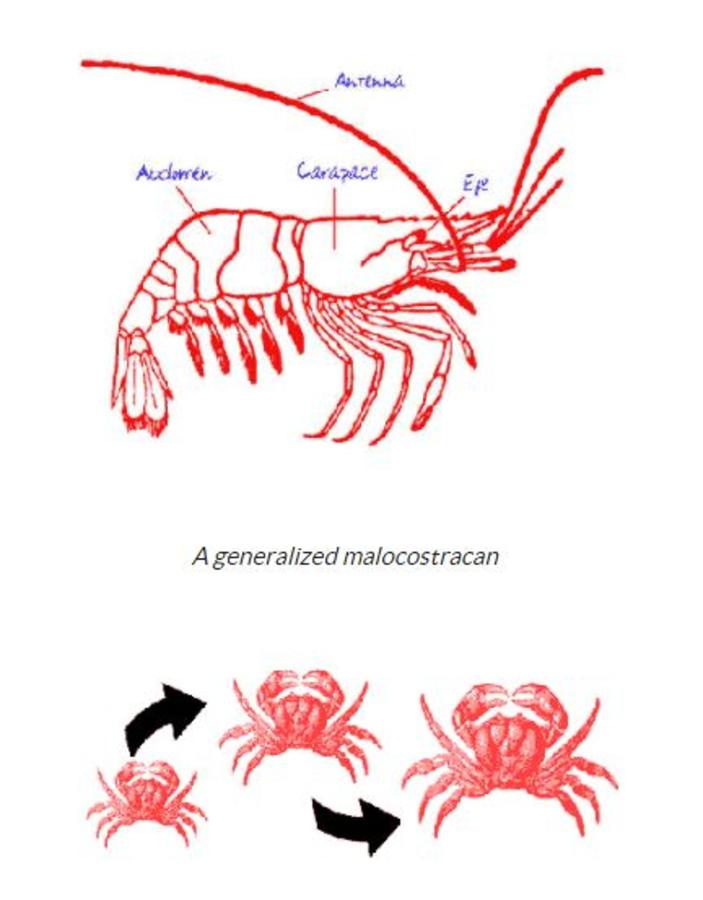 Although a crustacean grows, its exoskeleton does not, so the animal must molt its old exoskeleton in order to accommodate its expanding body.

The process of molting is hormonally controlled. In preparation for molting, the tissue layer under the exoskeleton detaches and secretes a new exoskeleton. At this point, the animal has two skeletons – the outer one and the inner one. When the new skeleton is completely formed, the old skeleton splits along specific weak points and the animal pulls out, leaving its old skeleton intact except for the split. Mobility is limited immediately after a molt because the exoskeleton is not rigid enough to keep the limbs stiff. Although crustaceans molt throughout their entire life, they molt less frequently with age.

Crustaceans are of great direct and indirect importance to humans. The larger crustaceans (shrimps, lobsters, and crabs) are used as food throughout the world, and are therefore important to human economies. Small planktonic crustaceans, such as copepods, water fleas, and krill, are a major link in the marine food chain between the photosynthetic phytoplankton and larger carnivores such as fish and whales. Still others are crucial in recycling nutrients trapped in the bodies of dead organisms. 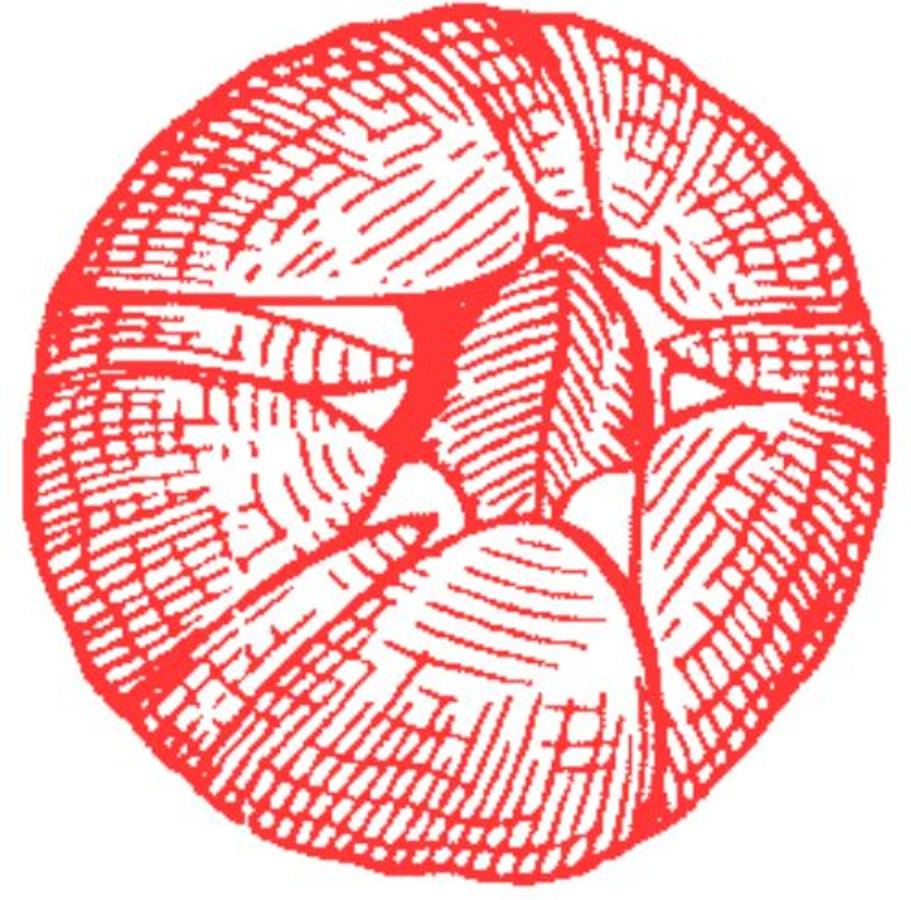 Naturalists have described the barnacle as a ‘shrimp-like animal standing on its head in a limestone house, kicking food into its mouth.’ Indeed, barnacles spend most of their lives standing on their head, using their feet to eat. In their larval stage, they look like shrimp and swim as members of zooplankton in the ocean. The barnacle has two stages of larval development. 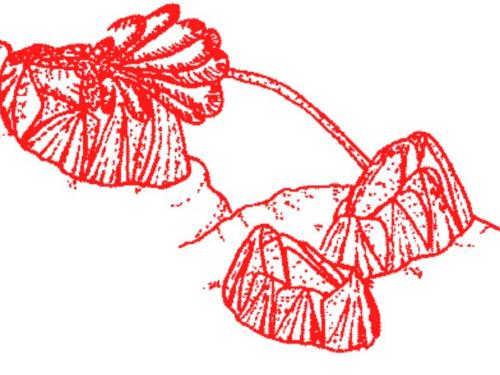 The first stage is called the Nauplius stage. The Nauplius larva emerges from its parent’s shell, ravenously consuming plankton. It then undergoes a surprising transformation, molting into its second stage: the Cypris stage. The interesting aspect of the Cypris larva is that it is non-feeding and a weak swimmer. The larva soon settles to the bottom and pulls itself with its antennae in search for a suitable home: rocks, dock pilings, boats, mussels, or even whales. After selecting a spot, the barnacle secures itself head-first to the surface with a very strong brown glue, now being studied by dentists for its adhesive properties. The larva soon begins to metamorphose into an adult and to build its tough housing.

The barnacle secretes six calcareous plates that totally encase the animal. Four more plates are secreted to form a ‘door’ that the barnacle can open or close depending on the tides. When covered by water, the barnacle rythmically opens its trapdoor to extend its feathery feet, called ‘cirri’, into the water, trapping plankton to eat. The legs also have gills for gas exchange

Most barnacles are hermaphrodites, meaning that one barnacle has both male and female sex organs. To reproduce, however, they indulge in cross fertilization. A retractable tube containing sperm reaches outside the shell as far as several inches to another barnacle to copulate.

All true crabs are in a subgroup of crustaceans called Brachyura. All crabs have four pairs of walking legs and two legs with claws. The edge of their shell is often toothed. They move sideways, holding their claws from their body. It is usually easy to determine a crab’s sex by turning a crab over and examining its abdominal flap. Female crabs have a wide abdomen to hold eggs, while males have a thin, pencil shaped flap. Crab eggs hatch and mature in three stages: a zoea stage, bearing no resemblance to the adult, a megalops stage, resembling a small lobster, and an adult stage. Zoea and megalops larvae live in the water with other plankton. After four or five weeks of drifting in ocean currents, a zoea molts to a megalops, which lives about a week then molts to a tiny crab that can swim or walk on the muddy bottoms. Through a series of further molts, the juvenile crab becomes an adult. 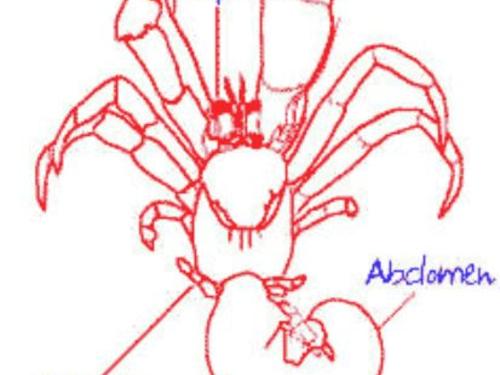 Hermit crabs are some of the most entertaining creatures in a tide pool. They run around on the bottom of pools, scavenging for food. These crabs look like tiny lobsters, though their body is often hidden by their protective shells. The hermit crab does not actually grow a shell. Instead, they move into empty mollusk shells as they grow, the process that gives them their namesake. A hermit crab locates its prospective shell, inspects the opening with its antennae and, if it likes what it finds, it quickly moves in. When threatened, they withdraw into their shells, blocking the entrance with their thick claws. They maintain a grip inside the shell that is so tenacious that the crab cannot be extracted without breaking the shell.

The eggs of a hermit crab are held inside the female’s shell while they mature. When they are ready to mature, the eggs are released in the ocean. The hatched egg is long and slender and bears little resemblance to the mature adult. At this stage the hermit crab is known as a zoea larva, which grows by molting. It sheds its exoskeleton and grows a new one. When it molts, it enters a stage called glaucothoe.

The claws and antennae develop during this month-long stage. After another molt, it becomes a hermit crab, ready to find a shell to house its soft abdomen. 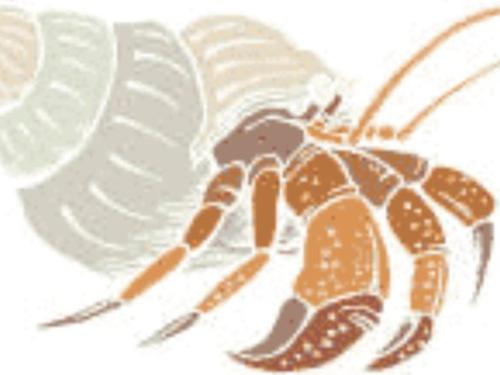 Hermit Crabs
Keep an eye on your favorite shell,
Nearby a sly spy waits.
With one blink your shell is gone
And another in its place.
—W.E.M.

Lobsters are heavy-bodied decapods and are generally inhabitants of holes and crevices of rocky bottoms. Using their four sets of paired legs, lobsters walk along the bottom, feeling the path ahead by waving their antennae. Their two front legs are actually claws – a large crusher claw, and a smaller claw for transferring food to the mouth. They also have two pairs of antennae (or feelers) and a tail with broad, scaly plates on the end. They can swim by flipping their fanlike tail forward violently. This motion propels them backward. In mating, a male impregnates a newly molted female. Sperm is stored in the female’s body until spawning, and remains viable for at least nine months. In spawning, eggs flow from an opening in the female over the sperm and are then attached to the mother’ swimmerets by a natural adhesive. The eggs are aerated and protected under the tail throughout the nine to twelve month incubation period. The rest of their life cycle is very similar to their relative, the crab. 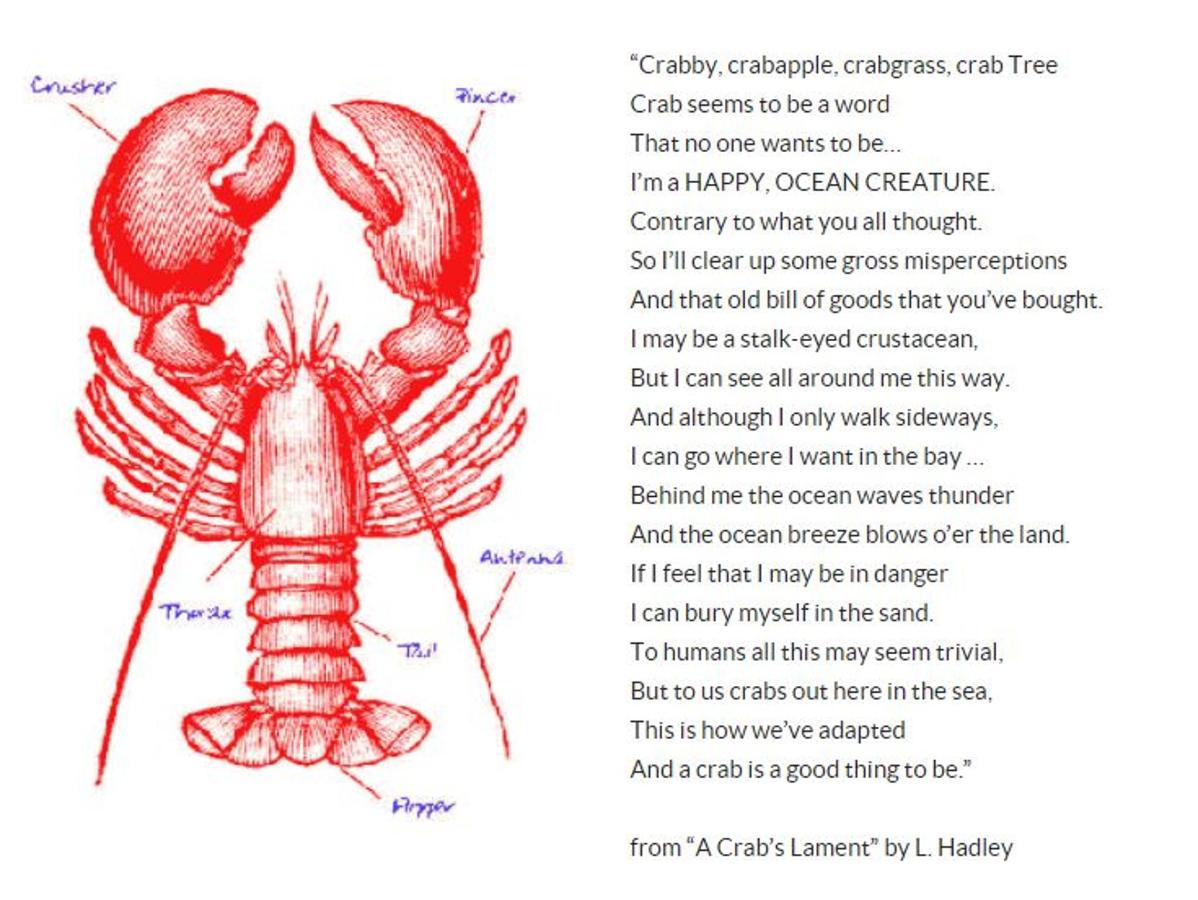 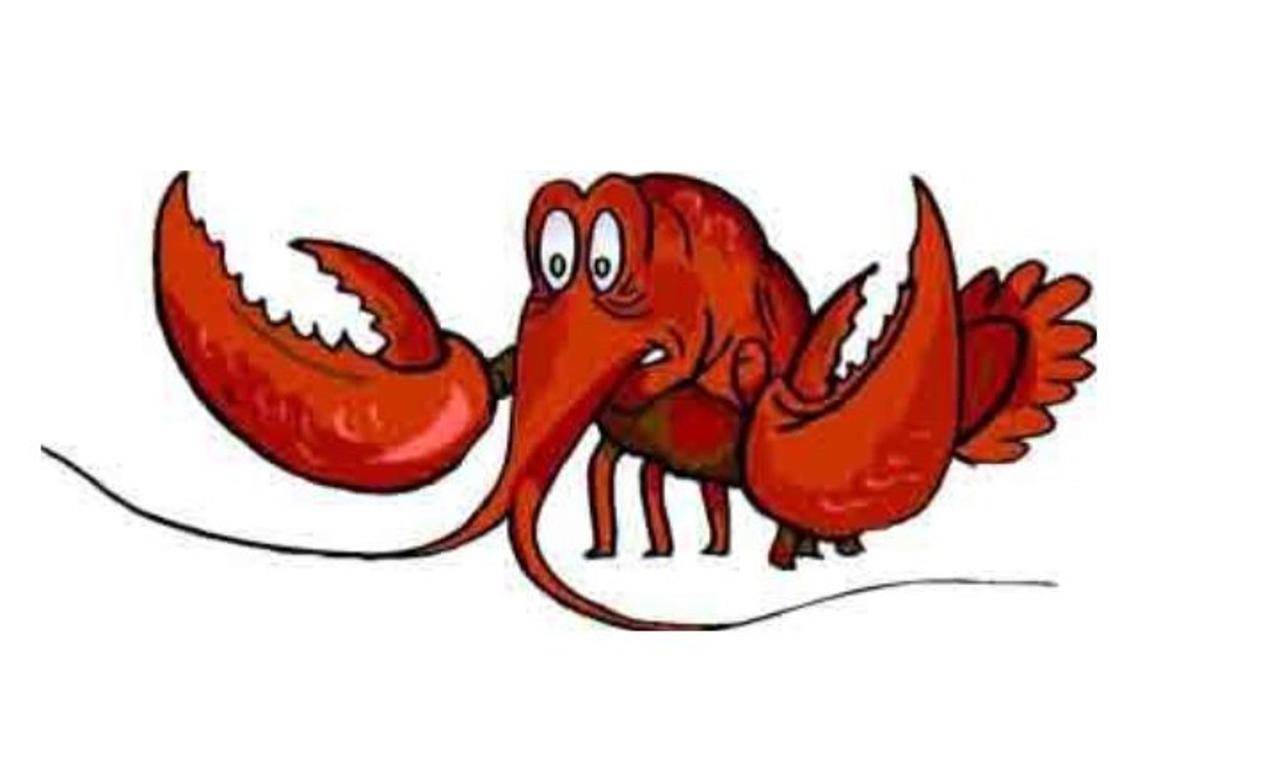 “Perfection in a lobster involves several factors, best understood, perhaps, through an examination of its life and habits … Lobsters are very strange creatures indeed, both in appearance and in their activities, and I find them interesting as well as succulent.”

“What do they got? A lot of sand -We got a hot crustacean band!”

“Under the Sea” from Disney’s The Little Mermaid