The study of inland waters – ponds, lakes and streams – is called limnology. Ponds form as a result of potholes in glacial debris. These holes fill by seepage and runoff water from the surrounding land. Meadow-stream ponds also develop where a stream widens and the speed of its current drops sharply, or as cutoffs from old stream channels. Streams originate in lakes, springs or in surface runoff, draining the land and taking up elements as they flow along. Constant adjustments and changes in flow or in erosion rates allow the stream to maintain balance and equilibrium. Streams are thus very dynamic, ranging from tumbling brooks in spring to sluggish, meandering waters come late summer and autumn. 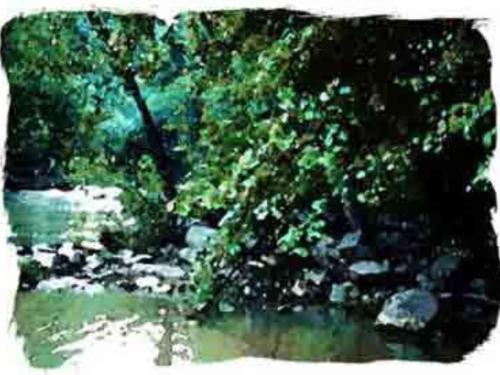 Whether temporary or permanent, a pond is a quiet body of water so shallow that plants grow all across it and all along the shore. Lakes, on the other hand, are deep enough that at least some part does not receive sunlight on the bottom, not allowing any plant growth. The water temperature of ponds is fairly uniform from top to bottom, and the water temperature tends to vary along with the air temperature. The amount of dissolved oxygen in a pond may vary greatly in a twenty-four hour period, building up during the day and dropping at night.
The area that a stream drains is called its drainage basin, or catchment area. The stream bottom extends down beneath the ground, and its sides stretch out into its floodplains. Gases from the air like oxygen, carbon dioxide, and nitrogen, as well as other chemicals, dissolve into the water. These gases are most soluble in cold water and in water that is churned as it flows downhill. The stream also carries particles of dirt, sediment, and organic matter including tiny bits of leaves, bacteria, and insects. As it flows towards the ocean, the stream deposits silt and sediment on its floodplain, creating rich agricultural lands and allowing many organisms to thrive. 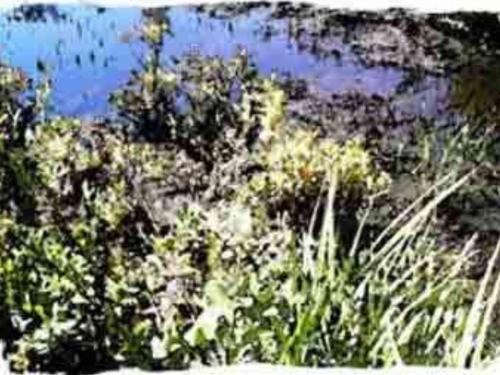 Four different microhabitats coexist within a relatively small area formed by a pond or stream: the surface film, the open water, the bottom and the littoral habitat.

The surface film is a habitat for air-breathing, floating animals, and those animals that have special devices for walking on the surface without breaking through, such as water striders. Some beetles, water bugs and free-floating plants are adapted to living only on the upper side of the film. The larvae of some beetles, as well as stonefly and mayfly larvae, spend much time hanging on the underside of the film.

The open water contains large, free-swimming animals, such as turtles, birds and fishes, and small microscopic plants and animals – plankton – that drift suspended in the water. Phytoplankton is mostly algae. Zooplankton consists of tiny crustaceans, rotifers, some insect larvae, and other invertebrates. 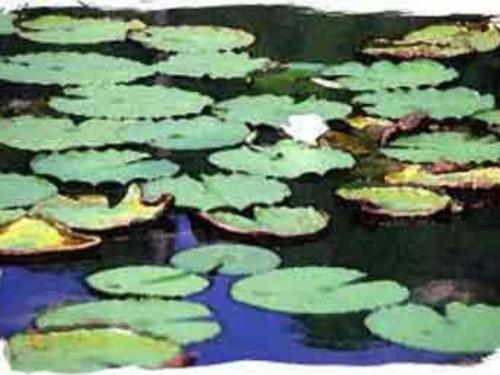 The sandy bottom is home to sponges, snails, earthworms and insects. Muddy bottoms house crayfish, the nymphs of mayflies, dragonflies and damselflies, as well as leeches and snails.

The littoral habitat can be divided into three zones. The emergent plant zone is closest to the shore, where grasses, sedges and rushes provide shelter for frogs, birds, mammals, algae, protozoans, worms, insects, snails and small fishes.

The floating-leaf zone, as its name suggests, contains broad, flat-leaved water lilies, water ferns and duckweeds, where snails, bugs, mayflies, algae and sunfish live. Finally, the submersed plant zone consists of pondweeds, hornworts and waterweeds. The leaves of these plants are either long and sinuous or bushy and very branched. Their flowers are pollinated above the surface, while the seeds germinate and the young plants develop only under water.

Algae form pond scums and the green hairy growths on submerged objects. Green algae are the most abundant pond algae. They occur as single cells, as round and flattened colonies, and as filaments. Algae is the base of the pond food pyramid. During photosynthesis, algae release oxygen, increasing the amount of oxygen dissolved in the water. However, the overabundance of decaying algae may deplete the oxygen, causing “summerkill” of aquatic plants and animals. 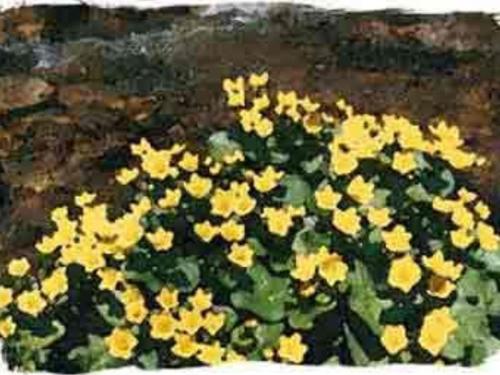 any species of pondweeds grow in the submersed plant zone. Pondweeds are the largest family of truly aquatic seed plants. Several kinds of ducks feed almost wholly on pondweeds. In the floating-leaf zone, look for the Fragrant Water-Lily, which has large, notched, rounded leaves that are dark green on the upper surface and reddish-purple below. Both the leaves and the white or pink flowers float on water, giving off a rich, sweet scent. Soft, spongy, underwater stalks support the leaves and flowers. Among the grasses you may see in the emergent plant zone is the Short-awn Foxtail. This grass grows from six inches to two feet tall, topped by spikelets in a slim, dense cluster.
On the shore surrounding the pond, you may find dense thickets of Speckled Alder, a member of the birch family, common in eastern wetlands. The three-inch leaves are elliptical and irregularly toothed, with sunken veins above. The name of this small tree is derived from its bark, which is smooth, gray and speckled with white. The Black Willow grows up to seventy-five feet tall. Its bark is dark brown or blackish and furrowed into scaly ridges. The four-inch leaves are narrowly lance-shaped, finely toothed and shiny. Male and female flowers, called catkins, grow on separate trees. Deer and rodents nibble on the shoots, and sapsuckers feed on the sap in wells they excavate from the inner bark.

Brown Bullheads, like other catfish, have a smooth, scaleless skin, and chin whiskers, or barbels, that aid them in finding food. They feed mostly at night or in opaque waters. Black Crappies are large, carnivorous sunfish that sometimes grow to four pounds, although they are usually one to two pounds. Another member of the sunfish family, the Bluegill, grows up to eight inches, feeding on insects, crustaceans and other small animals. A similar fish is the Pumpkinseed, which has a bright red spot on each gill cover.

Amphibians, such as brook salamanders, newts and frogs, live in the vegetation surrounding ponds and streams. The moist skin of an amphibian can absorb both water and oxygen. Frogs have lungs in addition to their breathable skin. Like most amphibians, frogs begin their life cycle in the water, with their long-tailed larvae known as tadpoles or pollywogs. 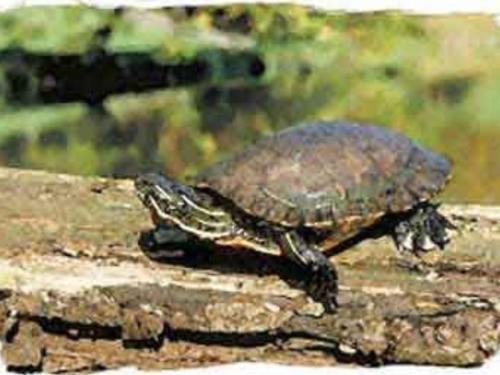 A few reptile species live near ponds and streams. The Painted Turtle is common and conspicuous, often basking in groups. It has a smooth, flattened carapace fringed with fine red lines. The Northern Water Snake is a heavy-bodied, harmless, but quick-tempered snake that basks on branches or rocks.

Dragonflies are graceful insects that hunt for smaller bugs such as black flies as they fly around the pond. Immature dragonflies, or naiads, are waterbound and do not resemble adults. They are dull green or brown, which helps conceal them among pond plants or beneath a film of mud. The naiads undergo a series of molts, getting larger, until the familiar dragonfly form appears at the final molt.
Damselflies are much thinner than dragonflies and fold their wings over their backs when not flying, unlike dragonflies, who keep their wings extended horizontally at rest.

Many bird species nest along ponds or streams and feed on aquatic plants or on fish and other animals. Common Loons spend the summer on inland waters, feeding mainly on fish. You can hear their distinctive song on summer nights. The Great Blue Heron is a long-legged wader with sharp bills for feeding on aquatic animals. Ospreys have a conspicuous bend in their wings in flight, as they dive for fish. Surface-feeding ducks, such as American Black Ducks, Green-winged Teals, Northern Pintails and Mallards feed mainly on aquatic plants and may “tip up” in deep water. Yellow Warblers nest in willow thickets, coming to the pond to drink and to hunt for insects. 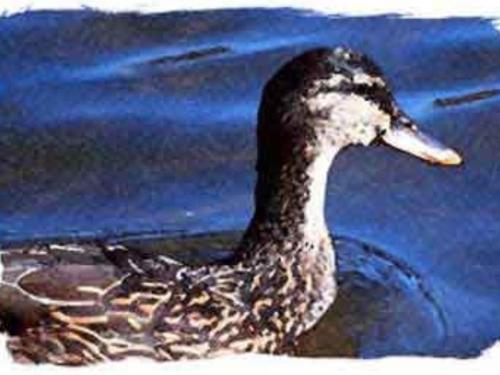 inally, a few mammals live in burrows that they dig in banks along the margins of ponds and streams. American Beavers cut down trees by gnawing on the trunk, and construct dams using sticks, reeds and saplings caulked with mud. They eat the bark and twigs of broadleaf trees. Common Muskrats look like overgrown field mice that have adapted to life in the water. They build mound-shaped lodges on platforms of mud piled with cattails, sedges, small sticks and leaves. They feed primarily on duckweed, although they also eat water-lilies and other pond plants. Northern River Otters love to exercise and play in the water. At night, weasels, such as minks and ermines, prowl the night in search of prey. These agile hunters will attack animals larger than themselves! Often these animals are hunted for their rich coats. Most weasels are lustrous brown or black, but the ermine turns white in winter.

Not a fish can leap or an insect fall on the pond but it is thus reported in circling dimples, in lines of beauty, as it were the constant welling up of its fountain, the gentle pulsing of its life, the heaving of its breast. 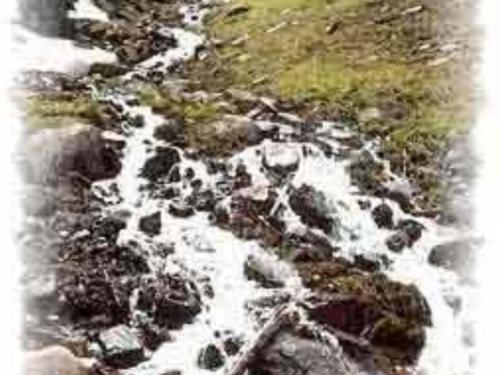 It does not cluck.

A cluck it lacks.

It is specially fond

Of a puddle or pond.

When it dines or sups,

To a Little Brook

All up and down this reedy place

Where lives the brook,

We angled for the furtive dace;

The redwing-blackbird did his best

To make us think he ‘d built his nest

He’d hung it in a secret spot

Far from the brook, the telltale brook!